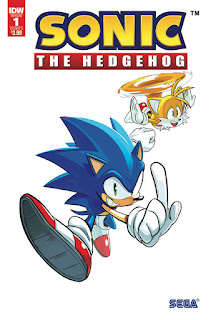 SAN DIEGO, CA (April 11th, 2018) – IDW Publishing and SEGA® of America are thrilled to announce that Sonic the Hedgehog issue #1 has sold-out after arriving in stores on Wednesday, April 4th. To meet fan demand, second printings will begin immediately, and fans can expect them in stores on May 2nd, 2018.

“We know fans have been waiting a long time for this launch, and we couldn’t be happier with their response to the first issue,” said Joe Hughes, editor of Sonic the Hedgehog. “This first issue was the start of a four-week event that kicked off the beginning of a new era for Sonic comics. The new series will feature new adventures with characters new and old and I cannot wait for fans to see what’s in store.”

“The SEGA and IDW teams have worked tirelessly since the announcement last July,” said Michael Cisneros, Licensing Specialist at SEGA of America. “The incredible outpouring of support from our fans these past nine months has made everything worthwhile.”

For more information on securing copies of the second printings, contact your local comic shop or visit www.comicshoplocator.com to find a store near you.