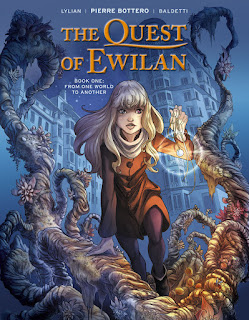 
SAN DIEGO, CA (April 17, 2018) — EuroComics proudly presents the English-language debut of The Quest of Ewilan, Vol. 1: From One World to Another, the first chapter in the sequential adaption of Pierre Bottero's bestselling novel series and a whimsical adventure featuring strong female characters, in the tradition of Lewis' Narnia and L'Engle's Time Quartet. Scripted by Lylian and illustrated by Laurence Baldetti, The Quest of Ewilan, Vol. 1 will be available in stores in September.


In this epic grand fantasy, 13-year-old Camille’s life is forever changed when, trying to avoid an oncoming truck, she passes through a portal to a parallel world called Gwendalavir. She’s immediately threatened by creatures called Ts’liches, who claim that they’ve been searching for her so they can kill her! Luckily she’s zapped back home, but her best friend Salim is skeptical of her story…until giant spiders attack them from the other side. Once back in Gwendalavir, she learns that she is originally from that other world, the daughter of two powerful magicians who sent her to our world for her own protection. Camille has inherited a tremendous gift — magic drawing, the ability to manifest things by creating a mental image of them. As the battle for two worlds intensifies, she hones the skills that might be a decisive weapon in the struggle of her people to regain power and restore freedom and dignity to Gwendalavir.

Creator Bios: Pierre Bottero (b. 1964) grew up Provence, France, where he worked as a primary school teacher before turning to writing full time. He's best known for his Gwendalavir series, made up of four complete trilogies and an unfinished fifth. He died in 2009.

Lylian has been writing comics since 2004 and currently writes several series, both adaptations and original stories.

Laurence Baldetti was born in Nice and studied comics, illustration, and sculpture at the Emile Cohl school in Lyon. The Quest of Ewilan is her first major comics work. She has also created the two-volume Perle Blanche with Sébastien Floc'h.
EuroComics Graphic Novel IDW IWD EuroComics The Quest of Ewilan Volume 1