Intergalactic Expo is this Sunday 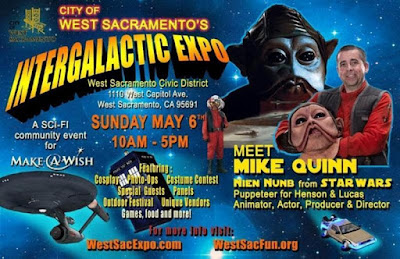 Intergalactic Expo is this Sunday May 6th from 10am-to 5pm.

It is a special event celebrating Sci-Fi/Fantasy and pop culture, hosted by the City of West Sacramento benefitting Make-A-Wish of Northern California.

The convention will be held in 2 large buildings, with outdoor events.
A fun family friendly event you do not want to miss!

Mike is a Puppeteer, Creature Performer, Animator, Actor, Producer and Director.
He was chosen and mentored by Jim Henson to work as a Muppet Performer on many Muppet film and television projects, including The Great Muppet Caper, The Dark Crystal, Labyrinth, Fraggle Rock, The Storyteller, Dreamchild, Muppet Christmas Carol and more.  He also worked on Who Framed Roger Rabbit? And Little Shop Of Horrors.
A wonderful opportunity to meet the Star Wars actor, in his first appearance in Northern California!

Mike Quinn will have many photos for sale, with $40 per autograph, $25 per selfie photo (no flash), or a $60 combo (1 autograph and 1 Selfie).
Also appearing:
C Andrew Nelson, who played Darth Vader in the Star Wars Special Editions.

Jeffrey Weissman, most famous for playing George McFly in Back to the Future 2,3.

Marty's Truck (replica) from back to the Future, a Delorean Car,
large custom At At walker from Star Wars, custom Ghost Rider motorcycle,
and a outdoor mini carnival with a kids obstacle course, and much more!
Bid on our special charity auction!
Some auction item highlights include: A rare Sacramento exclusive Disney Giclee , donated by Stage Nine Ent (valued at $695).

Autographed basketballs by NBA legends Bill Walton and Kevin Durant,
and many more items from local businesses and vendors!
We appreciate your support along with the City of West Sacramento, in helping our goal of raising $7,000 for Make-A-Wish!

There will so much fun activities at this event, it will be a great way to share a day with the entire family!
2018 California Event Fantasy Intergalactic Expo Mike Quinn Nien Nunb Pop Culture Sacramento Sci-Fi Star Wars West Sacramento