Every Day is Free Comic Book Day at Webtoon!

These new titles will release alongside the previously announced line-up of Outrage, by Deadpool co-creator Fabian Nicieza and artist Reilly Brown; Finality, by Warren Ellis and four-time Eisner-winner Colleen Doran; Backchannel, by Stan Lee, Tom Akel, and Andie Tong; and Caster, by Austin Harrison, Mike Raitch, Zah Howard, and Jason Masters, with original music by Common; as well as the highly anticipated return of Sanford Greene’s 1000 and 2018 Eisner-nominee Brothers Bond by Ryan Benjamin and Kevin Grevioux.

The new releases include: 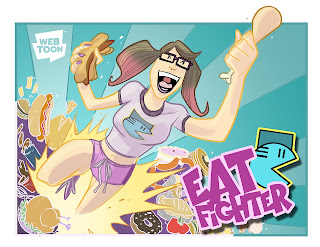 ●       Eat Fighter by Fred Van Lente (Marvel Zombies, Big Trouble in Little China), Crystal Skillman, and Fernando Pinto – launching this summer.
Eat Fighter is a competitive eating, zombie murder epic that follows Miss, a thirty-something fitness nut who throws away her kale and step-counting ways to become a superstar on the competitive eating circuit. Following the lifestyle of her late brother, who was a champion competitive eater himself, she embarks on a quest to Seoul to become the World Champion Eat Fighter. But eating barrels of barbecue and acres of apple pie doesn’t come without a price—so what’s Miss’s secret as to why she can eat as much as she wants and never gain a pound? 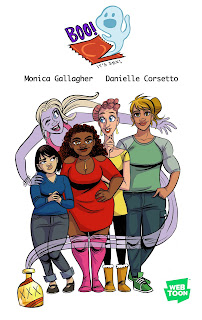 ●        BOO! It’s Sex by Danielle Corsetto (Girls With Slingshots) and Monica Gallagher (Assassin Roommate) – launching this summer.
High school classmates Denise, Christine, Lindsey, and Kim, move into a former sorority house for their first year of college, and immediately discover the ghost of a dead sorority girl stuck in a discarded bottle of tequila. While the freshwomen are settling into college life, Tara settles herself into the center of their personal lives, acting as a seasoned mentor for their transition from girls to ladies. Being dead for a while (she never has the same answer for when or how) has given Tara a perplexingly thorough knowledge of sex, relationships, body stuff, and even friendship.

●        Renai the Witch by Keron Grant (Superman, Iron Man) and Ytasha Womack – launching in late 2018.
Renai is convinced that madness follows her every step.  After her boyfriend Tory betrays her by falling in love with her best friend Angela, Renai becomes convinced that Angela cast a spell on him.  A meeting with her Aunt Kita confirms her suspicions of an underworld of sorcery.  In order to save her beloved Tory, she must connect with her inner witch and the light within herself to stand up to the grim forces in her way. 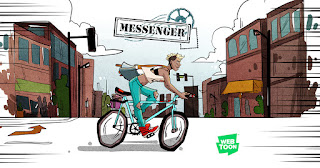 ●        Messenger by three-time Eisner-winner Paul Tobin (Bandette, Plants Vs. Zombies) and Ray Nadine – launching May 2018.
Messenger follows Dare Crilley, a bike messenger who is utterly unsurpassed. She scoffs at bad weather, traffic is barely an obstacle, and she’s never missed a delivery. That’s good, because Dare is about to discover her mysterious new client is literally divine, and that a dispute between the gods means the fate of the universe rests on a series of increasingly more difficult bicycle deliveries. Will Dare fail on any of these fateful missions? Can she assemble all the parts for the Legendary Divine Bicycle? One thing’s for sure, Dare never backs down when it’s time to deliver. 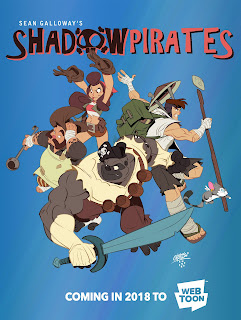 ●        Shadow Pirates by Sean Galloway (Hellboy Animated, The Spectacular Spider-Man) and Ian Hopps – launching in late 2018.
In Shadow Pirates, Mao, leader of The Yakooza Group, is stuck behind bars in Old San Diego following an unfortunate run in with The Shadow Pirates.  After convincing a group of teenagers to aid in his escape by promising them a greater power than they can imagine the ultimate burst they are transported to New San Diego where they begin their adventure to unlock the burst in the form of The Four Horseman: war, pestilence, famine, and death. 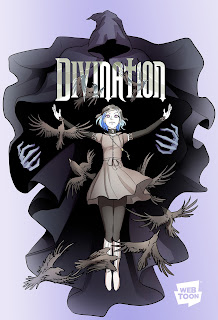 ●        Divination by Eisner-nominee Val Staples (Criminal, X-Men), Gina Iorio, and Melinda Timpone – launching this fall.
In the gothic thriller Divination, readers will explore the world of death, demons, spirits, and angels, after Ana’s teenage life is thrown into chaos when she begins to see manifestations of the undead. As the mysterious Reapers continue to appear with more intensity, Ana soon finds herself on a path towards an uncertain destiny that will have drastic consequences for both her and the entire world. 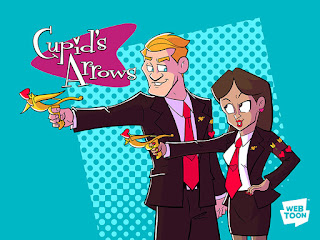 ●        Cupid’s Arrows by Thom Zahler (Warning Label, My Little Pony) – launching in late 2018.
Cupid’s Arrows follows Rick and Lora, a team of Arrows who work for Cupid, the god of love, and attempt to execute the wishes of The Book of Love, which gives the details on which couples will get together for a legendary love story. They’ve received their newest mission and must work together to bring about the perfect and memorable moment, assuring a lasting start to their couple’s relationship.  However, even after working together for hundreds of years, they banter and bicker like brother and sister to cover the feelings they have for each other–will these Arrows finally realize they are more than just friends? 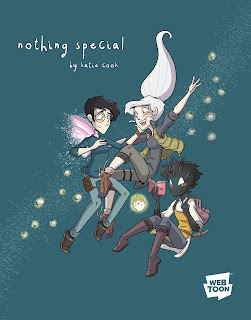 ●        Nothing Special Season 2 by Katie Cook
In Nothing Special, spirits, gods, and demons wander both their realm and ours. The series follows Callie, a lonely teen who grew up splitting her time between the human and spirit worlds due to her father’s job as an antiques collector in the spirit world. When her father mysteriously vanishes in the spirit realm, Callie is forced to journey further into the world than ever before in an attempt to rescue him. In Season 2, readers can continue to explore Callie’s world filled with adventure, family secrets, and romance.

●        Heart Wired by Leanne Hannah (Masters of the Universe) and Rod Hannah – launching this summer.
Heart Wired follows 16-year-old Cal Mills, one of the first of seven children born on Mars.
Cal has always dreamed of traveling to Earth and experiencing the birthplace of humanity firsthand. However, he is held back by his fragile body, genetically-engineered to tolerate the microgravity environment of Mars. His parents have religious and philosophical issues with the trans-humanist movement, which pushes for total replacement of the organic biological systems of the human body with the synthetic machine. Things change when communication with Earth gets cut off suddenly and it becomes clear that a war of annihilation has taken place. The final act of the automated space-based military forces will be to eliminate all rival extraterrestrial assets. 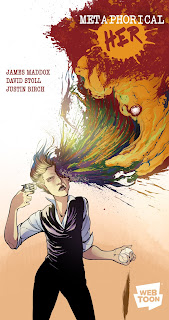 ●        Metaphorical Her by James Maddox, David Stoll, and Justin Birch – launching this summer.
Humiliated and exiled, a young poet and her friends build an underground following while fighting against the white-collar criminals who threaten their careers. In Metaphorical Her, Eleanor “Laney” Petra makes a social misstep and offends the man who holds the keys to success in her chosen field of work, poetry. Discovering an unlikely audience in the local rock scene, Laney shows that she can build a sizable following of outsiders that will force the poetic scene to recognize her and her work. All the while, Laney must fend off the people who want to cage her, her friends, and hinder their ambition. ​

“We are thrilled to have partnered with such talented storytellers to bring these unique comics to our readers,” said JunKoo Kim, Founder and Head of LINE Webtoon. “At LINE Webtoon we pride ourselves in having a comic series for every type of fan, and these new titles truly show the range of genres and stories that our creators are telling.”

Readers will get their hands on these new series starting this May. Until then, they can check out thousands of other amazing comics on the official LINE Webtoon app by visiting the Apple App Store and Google Play or on www.webtoons.com.
# # #

About LINE Webtoon:
LINE Webtoon is the world’s leading digital comic publisher available on smartphones, tablets, and web browsers. Pioneering the distribution and consumption of digital comics worldwide, LINE Webtoon is taking the comic experience to the next level by providing readers with daily curated content from around the globe and giving creators an intuitive platform designed to help them easily publish and publicize their own original content. For more information visit http://www.webtoons.com.
​
BOO! It's Sex Cupid's Arrows Divination Eat Fighter Heart Wired LINE LINE Webtoon Messenger Metaphorical Her Nothing Special Renai the Witch Shadow Pirates Webtoon