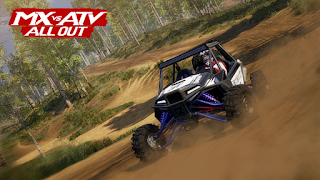 Rainbow Studios has announced today, Monday, May 14 that SLASH and Nicholas O’Toole have co-written the new theme song for the popular off-road racing video game MX vs ATV All Out. SLASH and Nicholas previously composed the score to SLASH’s first ever horror film titled Nothing Left To Fear, and re-teamed to create the track “Vanishing Point” for the action-packed game. Watch the gameplay trailer and hear the track HERE.
SLASH, the iconic American rock guitarist, songwriter and film producer-has amassed album sales of over 100 million copies, garnered a GRAMMY Award, and seven GRAMMY nominations and was inducted into the Rock and Roll Hall of Fame.
“Rainbow Studios and THQ Nordic set out to give a new shape to the MX vs ATV experience with All Out--aligning ourselves with the very best musicians for the soundtrack was as important as nailing the gameplay physics on the whips,” said Chris Gilbert, CEO of Rainbow Studios. “We’re thrilled to have someone of Slash’s immense talent as a partner on MX vs ATV All Out, combining off-road racing, video games, and awesome music.”
MX vs ATV All Out invites players of all skill levels to do it all--explore massive environments, compete in the best series events, ride freestyle and pull off insane stunts! All the bikes, tracks, gear, music, riders, personalities and even UTV’s are packed in!
MX vs ATV All Out is available now for $49.99 on consoles and $39.99 on PC.
Order here: https://mxvsatv.com/#order-here
MX vs ATV All Out Nicholas O'Toole PC Rainbow Studios SLASH Theme Song THQ Nordic Video Game