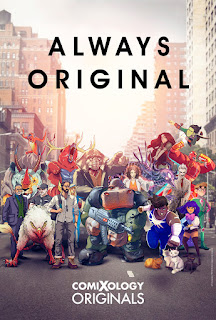 
June 1st, 2018 – New York, NY – ComiXology announced today it is releasing creator-owned comic books and graphic novels for the first time as part of its comiXology Originals program. The premiere digital comics service announced four new comiXology Originals titles – spanning fantasy, sci-fi, horror, and superhero genres – via a live streaming event on Twitch.  Today readers can dive into the debut titles through a variety of ways: they are free to read for members of Amazon Prime, Kindle Unlimited, and comiXology Unlimited and are also available for purchase on Kindle and comiXology.

The debuts feature a host of industry firsts, including:
“We’re proud to offer these creator-owned titles where creators keep their IP rights and are motivated to bring their A-game to the benefit of readers everywhere,” said Chip Mosher, comiXology’s Head of Content. “Helping bring these incredible titles to fans lets us experiment with different release strategies like a binge-style drop of a whole series, high quality print-on-demand, and day-and-date inclusion in Prime Reading, Kindle Unlimited and comiXology Unlimited.”

The new comiXology Originals titles were announced today in tandem with a livestream event on Twitch, hosted by noted esports personality Marcus "djWHEAT" Graham. During the livestream, which was screened at viewing parties at Amazon Books retail locations and Amazon Pop-Up kiosks across the United States, comiXology unveiled its “Always Original” ad campaign that spotlights the characters featured in today’s new releases. Customers attending the viewing parties were offered free print copies of the Savage Game graphic novel on a first come, first served basis.

Information on today’s comiXology Originals debuts can be found below:

Savage Game
Created by Ryan Kalil, written by Shawn Kittelsen, with art by Chris B. Murray 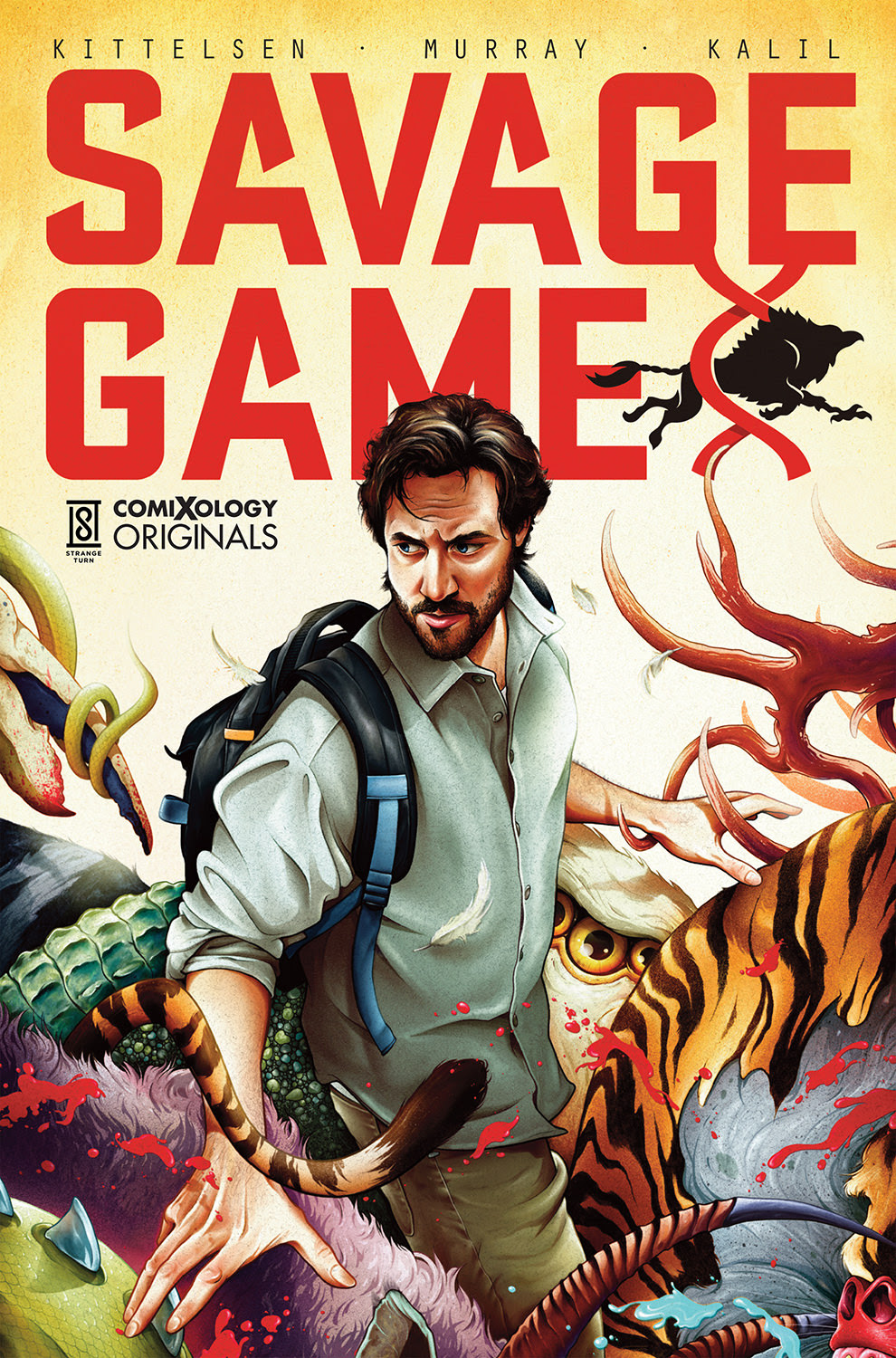 From NFL player Ryan Kalil and his company Strange Turn comes an original 60-page sci-fi graphic novel that is high tech version of The Island of Dr. Moreau. What happens when a rogue titan of Silicon Valley creates his own island nation with no laws to hold him back? You get the Savage Game, where audiences watch genetically modified hybrid creatures fight to the death in a fantastic gladiator-style battle. But Conner Bowen isn’t having it. He’s on a quest to stop his mad father and the Savage Game. But is it too late?
“Working on Savage Game has been a labor of love for everyone and I am really thrilled that it's finally coming out with comiXology Originals and via Amazon’s Print-on-Demand,” said Savage Game creator Ryan Kalil. “I am very excited for the reader response and for the future of Savage Game.” 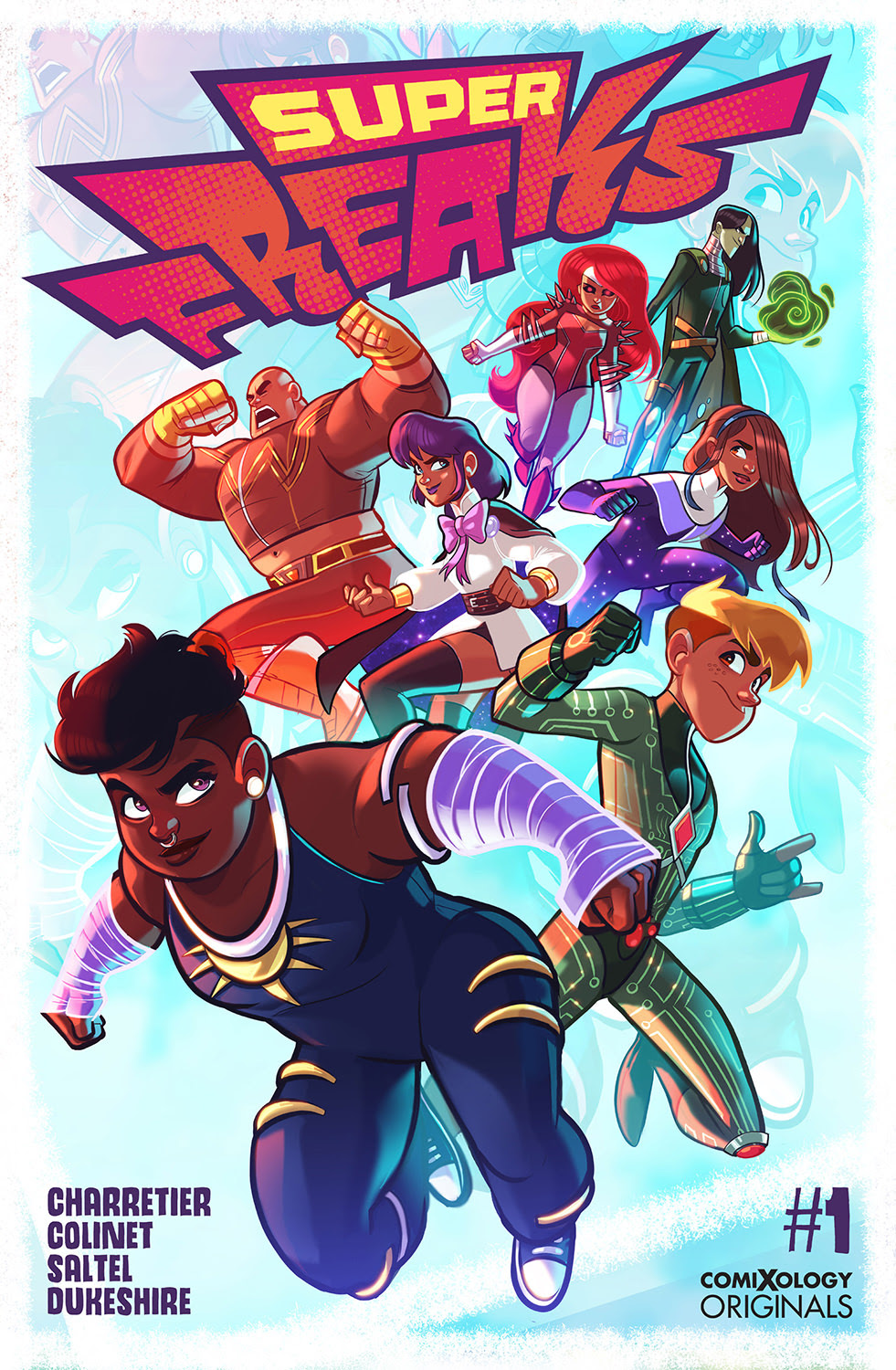 An all-new 5-issue superhero mystery debuting digitally in its entirety – a thrilling story perfect for binge reading - with art by rising star Margaux Saltel. All the world’s superheroes have disappeared overnight, and it’s up to their untrained, largely overlooked teenage sidekicks to find out what happened – while dealing with the biggest crisis Earth has ever known -- much to the public’s displeasure. Can they save the day?
“Not only am I ecstatic about Superfreaks being released today, but doubly so having the entire series being available all at once,” said Superfreaks writer Elsa Charretier. “Readers will experience all the cliffhangers we intended as storytellers, while binge reading the entire series the same day it's released. And when the world’s superheroes have disappeared overnight, you don't want to wait to see what's happened."

Elephantmen 2261: The Death of Shorty
Written by Richard Starkings with art by Axel Medellin and Boo Cook 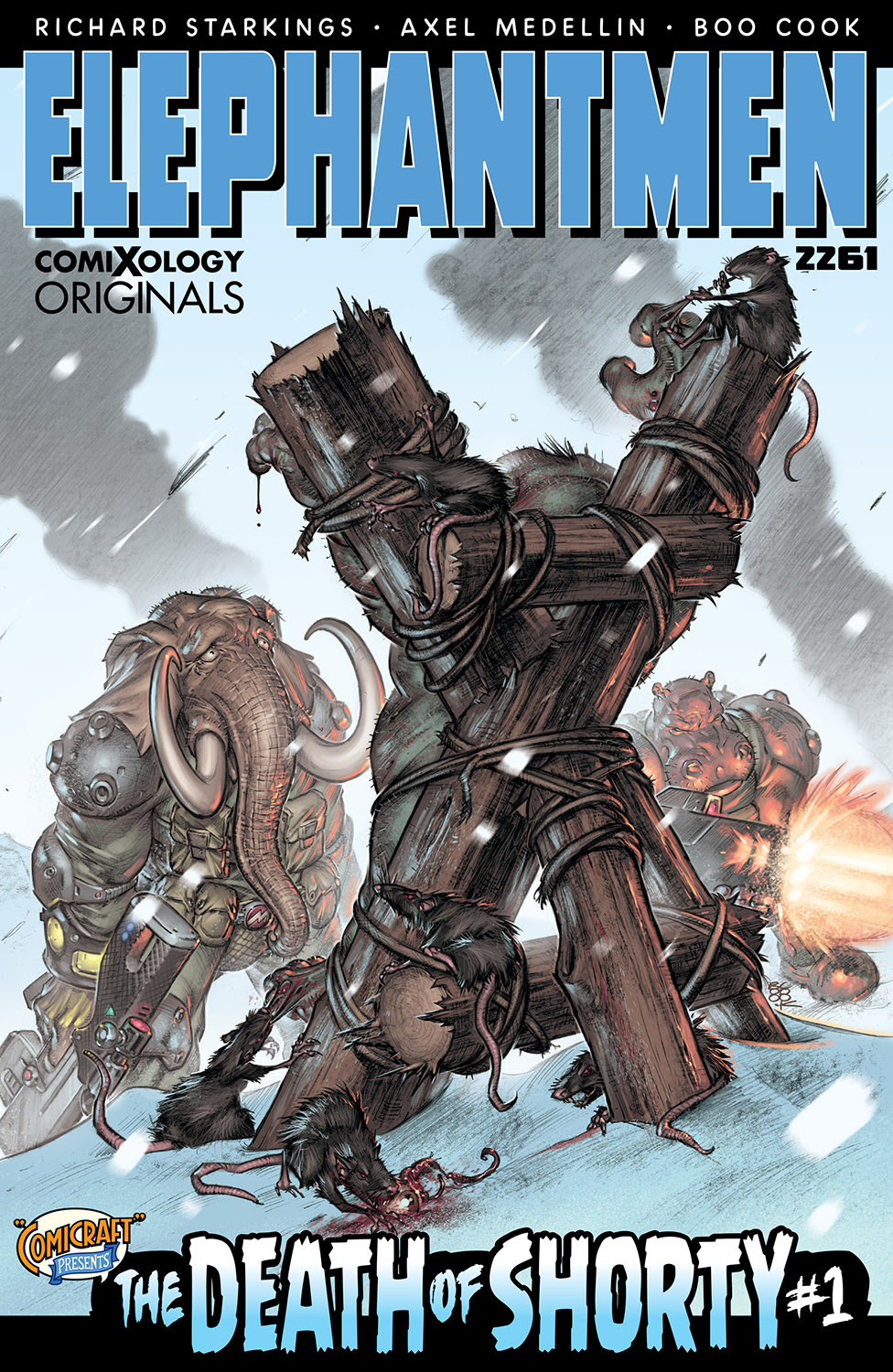 The iconic Elephantmen debuts asacomiXology Originals title with issue 1 of Elephantmen 2261: The Death of Shorty, a 5-issue monthly mini-series. Described by J.J. Abrams as “An Awesome and Unexpected Story. You Must Check it out!” and lauded by Andy Serkis as “Bold, mythic and heartbreakingly cool, Starkings’ universe is a breed apart!”, Elephantmen 2261: The Death of Shorty, is the next adventure of the pulp science fiction series Elephantmen, which debuted nearly 15 years and 80 issues ago from Image Comics. This all-new story is a whodunit that draws our heroes, Hip Flask and Jack Farrell, into the curious death of an Elephantman known to his friends as “Shorty”.
“Once I realized Elephantmen sold more digitally than in print, I suggested to my friends at comiXology that we create a brand new Elephantmen series exclusively for digital readers,” says Elephantmen creator Richard Starkings. “And yet – for those who’d rather hold a print version – you’ll still be able to order a Print-on-Demand paperback collection as soon as it’s complete!  I’ve seen what Amazon can do with Print-on-Demand and it's absolutely unbelievable!” 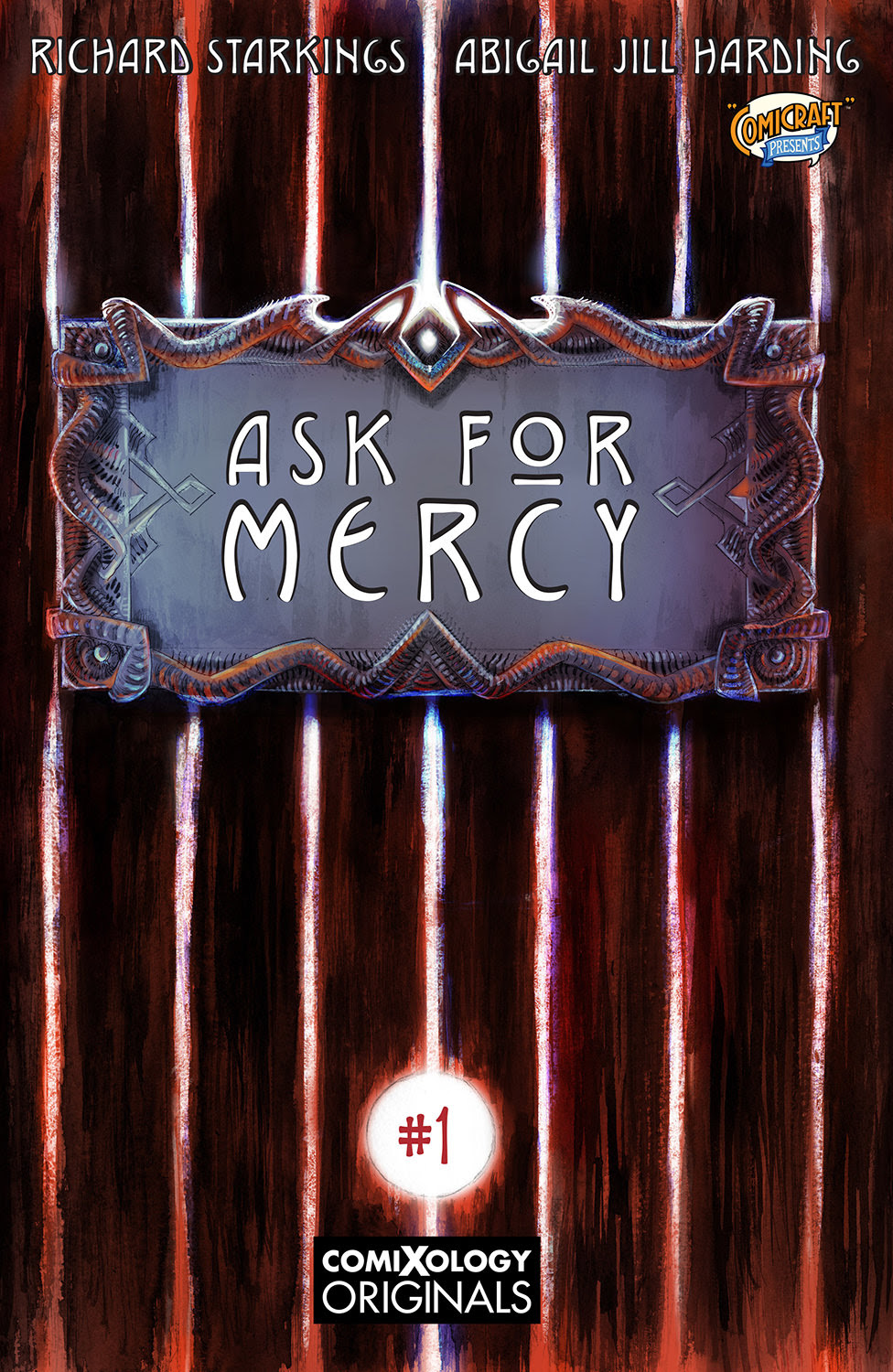 An action-packed and artistically stunning dark fantasy story from Elephantmen creator, Richard Starkings and breakout talent, Abigail Jill Harding. Ask For Mercy is a World War II fantasy horror story in the tradition of John Carpenter’s The Thing and Sandman. Mercy is snatched from her own place and time to join a team of Monster Hunters who are actually Monsters themselves, and together they have to take on a Pantheon of Hideous Creatures summoned to our world by Nazi evil!
Customers can enjoy today’s releases on a variety of Amazon’s membership services. Prime Reading offers Amazon Prime members a rotating selection of over a thousand top Kindle books, magazines, short works, comic books, children’s books, and more – all at no additional cost. Kindle Unlimited offers over 1 million titles, thousands of audiobooks, and select current issues of popular magazines for just $9.99 a month with a 30-day free trial at amazon.com/kindleunlimited. ComiXology Unlimited now offers over 15,000 comics, graphic novels and manga for just $5.99 a month with a 30-day free trial at comixology.com/unlimited. All titles are also available as individual purchases on Kindle and comiXology.

To learn more about Amazon Pop-Up and Amazon Books retail locations near you, as well as hours, visit www.amazon.com/popup or www.amazon.com/amazonbooks.

About comiXology
ComiXology, an Amazon.com, Inc. subsidiary (NASDAQ:AMZN), is a revolutionary, cloud-based digital comics service. With content from over 125 publishers as well as thousands of independent creators from around the world, comiXology provides an unrivaled library of comic books, graphic novels, manga and bandes dessinées. The company’s first-in-class innovations include the exclusive Guided View technology which provides an immersive and cinematic reading experience and a new monthly subscription service. ComiXology is based in New York City, with operations in Seattle and Los Angeles. For more information, visit comixology.com and follow the company on Twitter, Facebook and Tumblr.