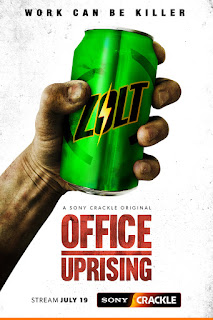 “Office Uprising” follows the story of an underachiever working at a major weapons manufacturing firm who finds that his co-workers have been “weaponized” by Zolt, a new energy drink designed for the military.  He must then set off to rescue his one true love from an office building full of psychotic coworkers armed with tomorrow’s deadliest tech.
Rounding out the ensemble are: Barry Shabaka Henley (“Bosch”), Kurt Fuller (“The Good Wife”), Kenneth Choi (“Spider-Man: Homecoming”), Gregg Henry (“Scandal”) and Sam Daly (“Murder in the First”).

About Sony Crackle
Sony Crackle is the place to escape and recharge, with exclusive Originals, blockbuster movies and hit TV shows for a console-first and connected streaming audience.  Sony Pictures Television Networks' free, ad-supported network offers a handpicked, constantly updated programming line-up, like binge-worthy Sony Crackle Originals such as “The Oath,” “Snatch,” “StartUp” and “SuperMansion,” as well as movies and series in genres including Drama, Action, Fandom, Comedy and Thriller.  The network is all on demand and accessible in the U.S. for free without subscription.  Sony Crackle is available in 20 countries on a wide variety of connected devices.  For more information, go to www.sonycrackle.com or follow @SonyCrackle on Facebook, Instagram and Twitter for real-time updates.