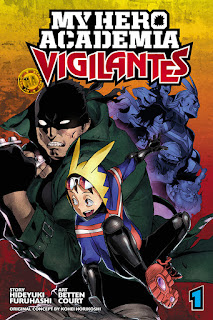 San Francisco, CA, June 12, 2018 – VIZ Media, LLC (VIZ Media), a premier company in the fields of publishing, animation distribution, and global entertainment licensing, announces a new series set in the world of the bestselling manga series MY HERO ACADEMIA with the release of MY HERO ACADEMIA: VIGILANTES on July 3rd.

The new comedy-action series MY HERO ACADEMIA: VIGILANTES has been highly anticipated by manga readers. The series is rated ‘T’ for Teens and will be published in print and digital editions under the Shonen Jump imprint. The print MSRP for Volume 1 will be $9.99 U.S. / $12.99 CAN. Digital editions will be available via viz.com and the VIZ Manga App, as well as from the Nook, Kobo, Kindle, iBooks, comiXology, and Google Play stores.

MY HERO ACADEMIA: VIGILANTES features story by Hideyuki Furuhashi and artwork by Betten Court and is based on original concepts by MY HERO ACADEMIA series creator Kohei Horikoshi. Future volumes of the series will be published every four months.

MY HERO ACADEMIA: VIGILANTES is set in a superpowered society, where there is nothing ordinary about evil anymore. Heroes, trained and licensed to protect and defend the public against supervillains, stand above all the rest. Not everyone can be a hero, however, and there are those who would use their powers to serve the people without legal sanction. But do they fight for justice in the shadows, or for reasons known only to themselves? Whatever they fight for, they are called…vigilantes.

“MY HERO ACADEMIA: VIGILANTES depicts the adventures of self-styled heroes who fight evil and defend the innocent in spite of not having the coveted Heroes License,” says Michael Montesa, Editor. “Dive into this exciting new series that expands the world of MY HERO ACADEMIA this summer!”

MY HERO ACADEMIA manga creator Kohei Horikoshi was born in Aichi, Japan in 1986. received a Tezuka Award Honorable Mention in 2006, and after publishing several short stories in Akamaru Jump, his first serialized work, Oumagadoki Doubutsuen, debuted in Weekly Shonen Jump in 2010. MY HERO ACADEMIA is his third series to appear in Japan in Weekly Shonen Jump and it was also adapted into a popular anime series that currently airs across North America on Adult Swim.

For additional information on MY HERO ACADEMIA: VIGILANTES and other manga titles published by VIZ Media, please visit viz.com.