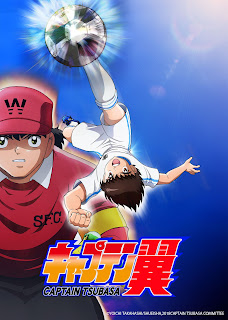 San Francisco, CA, Beverly Hills, CA and Atlanta, GA, June 6, 2018 – VIZ Media, LLC (VIZ Media), a premier company in the fields of publishing, animation distribution, and global entertainment licensing, is pleased to announce that Televix Entertainment has secured broadcast placement for the new CAPTAIN TSUBASA series on Cartoon Network Latin America July 1, 2018.  CAPTAIN TSUBASA is one of the most beloved manga and anime properties worldwide, featuring exciting soccer action and flashy, fantastic footwork. The series premiered on April 4, 2018 in Japan and further premieres are launching around the world.

“There is already hype building around the launch of the brand all over Latin America and we are expecting to see the success of the franchise rise to levels beyond the first two generations! Through our partnership with Cartoon Network Latin America, we can’t wait to bring the excitement of CAPTAIN TSUBASA to passionate fans all over the region!” says Hugo Rose, CEO of Televix Entertainment.
“We’re excited to bring the new CAPTAIN TSUBASA anime to audiences across Latin America,” says Brad Woods, CMO, VIZ Media. “For almost 40 years, generations of fans around the world have been engrossed by Tsubasa’s soccer exploits & expertise, and we look forward to a new generation of fans and soccer lovers discovering the exhilarating series on Cartoon Network Latin America!”

The new anime recounts the events of the original manga of the same name by Yoichi Takahashi, which ran in Shueisha’s Weekly Shonen Jump magazine from 1981 to 1988. The manga triggered a huge soccer boom in Japan and inspired three previous television anime series, four anime films, mobile and console video games, and even a stage play. Centered on a young soccer prodigy named Tsubasa Ozora, the new series is from David Production (JOJO’S BIZARRE ADVENTURE), with Toshiyuki Kato (JoJo’s Bizarre Adventure Diamond is Unbreakable, Level E) directing. Each episode is characterized by dynamic and stylish soccer moves, while the characters are fleshed out through Tsubasa’s friendships and rivalries as he trains and competes.

About Televix Entertainment
Beverly Hills based Televix Entertainment was established in 1990. Its main business is the distribution of animation, anime, family entertainment, documentaries, and feature films domestically and in the international market. Televix has offices and representatives in San Juan, Sao Paulo, Bogota, and Santiago. Televix licenses properties to broadcasters, DVD distributors, merchandising licensees, and mobile operators in Latin America, and is a qualified aggregator with all of the major digital platforms in the region.

Televix is partnered with Aronnax Animation Studios. Based in Lima, Peru, Aronnax is the leading animation studio in the region and has a dedicated infrastructure for 3D computer animation and cutting edge special effects.

Learn more about VIZ Media and its properties at VIZ.com.