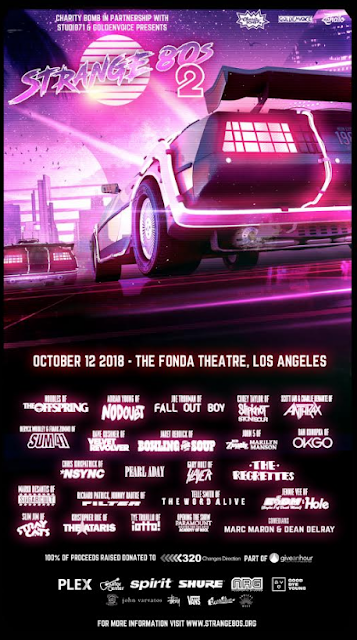 Los Angeles, CA - August 29, 2018 - Charity Bomb is proud to announce Strange 80s 2, the second annual benefit concert set to take place on Friday, October 12th at the Fonda Theatre. In partnership with Studio71, Strange 80s 2 will feature performances by a rotating cast of rock stars & celebrities covering the timeless anthems of the 80s! Tickets for Strange 80s 2 are officially on sale to the public, here http://bit.ly/2M5Nz2R. VIP tickets will include premier access to balcony seating, hosted bar, after-party admission and a Strange 80s t-shirt. All proceeds will go to 320 Changes Direction, serving those who suffer from mental health, depression and addiction issues. For more information, please visit: https://www.strange80s.com/.

Strange 80s 2 will feature appearances from: Marc Maron and Dean Delray, along with members of No Doubt, Fall Out Boy, Slipknot, Sum41, Slayer, Judas Priest, Bowling For Soup, *NSYNC, Eagles of Death Metal, Velvet Revolver, OK Go, Sugarcult, Filter, Rob Zombie, The Offspring, and The Regrettes, with additional performers to be announced over the next few weeks!

In addition to a full concert, Strange 80s 2 will feature an arcade installation of authentic 80s video games, and exclusive opportunities to interact with some of your favorite artists. Fans will be offered an opportunity to compete with artists in their favorite 80s video arcade game, to be projected onto the backdrop for the whole venue to watch during set change-overs. Special meet & greets are also available to bid on through Charitybuzz, here: http://bit.ly/2Lffxrz. Throughout the evening, fans will also be able to bid on a variety of donated items and experiences, such as rare 80s film props, guitars, and a Ducati motorcycle.

Charity Bomb's mission is to be a force multiplier for other charities and/or organizations that focus on fundraising for musicians and artists in need. They take action by producing live entertainment events on their behalf, primarily in support of mental health, addiction and others issues that are prevalent in the artist community.

About Charity Bomb
Charity Bomb is a non-profit organization founded by four philanthropic friends to produce benefit shows for a variety of charitable organizations in the scope of music. Our motto is "All Purpose Altruism" - we deliver 100% of the proceeds, 100% of the time, with 100% transparency, to ensure that the funds raised reach its intended constituency, every dime, every time.

Musician & Philanthropist, Matthew Leone was put into a coma with 1/3 of his skull removed after rescuing a woman being beaten on the streets of Chicago a few years back. From Kevin, Lyman & Warped Tour, to Kiss and Madonna, the international music community rallied to bring him back to life. Smashing Pumpkins even did a benefit show for him. Twin brother, singer for their band Madina Lake, Nathan Leone agrees, this is what saved his life. Consequently, the Leone's devoted their lives to giving back. After several years with Sweet Relief Musicians Fund & Help Musicians UK, it was time to branch out.  All-Purpose Altruism - Charity Bomb reflects the ubiquitous truth that love is the antidote for everything. This notion, as applied in our philanthropic context, asserts that we will drum up love, in all of its forms, for a particular cause or purpose, and drop it on the antagonist.

Los Angeles native, professional musician & acclaimed songwriter, Nik Frost, suffered from addiction. When drugs came dangerously close to claiming his life, it was fellow musicians, Dave Kushner & Brian O'conner (Velvet Revolver & Eagles of Death Metal respectively) who intervened and came to his rescue. Nik worked with Matthew on several projects, all a pre-destination to Charity Bomb. We are a non-profit, fundraising and awareness agent for any benevolent cause that enters our ether.

Ryan Ford, lifelong closest friend, philanthropist, successful entrepreneur, an avid lover of music, is the fourth Charity Bomber. Ryan's founded several businesses, MP45 Records among them, and brings the administrative acumen to complement his creative contribution to the collective. In short, we have the purpose, we know the right people and we know how to put on a show. We love a win-win-win outcome. It's abundantly clear that living a life where we produce spectacular live music events that serve a philanthropic cause, makes our constituents win, our clients win, and the fans win.

About 320 Changes Direction
320 Changes Direction is the latest strand of GiveAnHour.org's Campaign to Change Direction. It is a coalition of concerned citizens, nonprofit leaders, and leaders from the private sector who have come together to change the culture in America about mental health, mental illness, and wellness.