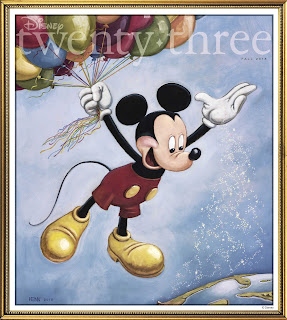 LEONARD MALTIN PENS A TRIBUTE TO MICKEY, AND STARS INCLUDING KURT RUSSELL, MARK HAMILL, AND WHOOPI GOLDBERG SHARE THEIR FAVORITE MEMORIES OF THE MOUSE
PLUS, PREVIEWS OF THE NUTCRACKER AND THE FOUR REALMS, DISNEY CHANNEL’S STAR WARS RESISTANCE, AND A BRAND-NEW PORT COMING TO TOKYO DISNEYSEA

Plus, D23 is kicking off its annual Fanniversary honoring two beloved films celebrating their 25th anniversary: Hocus Pocus and Tim Burton’s The Nightmare Before Christmas. Director Kenny Ortega talks about the making of Hocus Pocus and all of the on-set excitement working with Bette Midler, Kathy Najimy, and Sarah Jessica Parker. This month’s “Character Analysis” examines the frightfully fun denizens of Nightmare, along with a first look at the new Nightmare-themed gingerbread house coming to Disneyland’s Haunted Mansion Holiday attraction overlay this year. For more Fanniversary fun, visit D23.com/Fanniversary beginning October 1.

Also included in the fall issue of Disney twenty-three:
Disney twenty-three, which is delivered directly to fans’ doorsteps, is offered exclusively to D23 Gold and Gold Family Members as a benefit of their membership. The latest issue will begin arriving in mid-August.
About D23
The name “D23” pays homage to the exciting journey that began in 1923 when Walt Disney opened his first studio in Hollywood. D23 is the first official club for fans in Disney’s 90-plus-year history. It gives its members a greater connection to the entire world of Disney by placing them in the middle of the magic through its quarterly publication, Disney twenty-three; a rich website at D23.com with members-only content; member-exclusive discounts; and special events for D23 Members throughout the year.