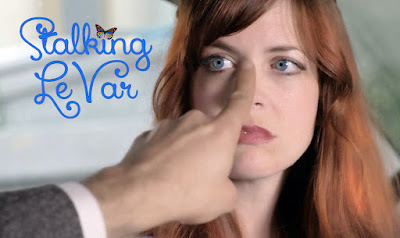 A continuation of the popular Stalking LeVar web series, the short film acts as a one-off series finale co-written by Dweeb Darling’s Heidi Cox (playing the protagonist) and Geekscape’s Jonathan London (who is directing). “I’m so grateful to Jonathan and Geekscape for their constant support and we at Dweeb Darlings are beyond excited to be partnering with such a positive force in our community,” says Dweeb Darlings founder and Stalking LeVar creator Heidi Cox. “It’s going to be super fun!”

According to director Jonathan London, "we have a story that moves between being very funny and also very moving. I wanted the challenge of working on something that Geekscape hasn't really done in the past and that's telling a story centered around a strong female protagonist. She's not running from aliens or fighting ninjas. She's growing up and starting to realize that pop culture may have substituted for one too many things in her life. It's pretty internal... which makes it more unique. Not to say that there won't be some pro wrestling."

Launched at last week's San Diego Comic Con, the Stalking LeVar Seed & Spark campaign jumped to an impressive 20% of its funding goal and now seeks further help to get it to the finish line. We welcome you to share the campaign with your audience and hope that they will connect with the story of someone who is perhaps not too different from themselves.


About Geekscape Since 2006, Geekscape has grown from a single podcast into a podcast network, fan community and entertainment production company. Founded by Jonathan London and Georg Kallert, the weekly Geekscape podcast has featured guests like Simon Pegg, Stan Lee, Felicia Day, Tyler Oakley and many more! In 2014, Geekscape co-produced the Epix feature length zombie culture documentary Doc of the Dead featuring the likes of Robert Kirkman, Max Brooks, George Romero and Simon Pegg and premiering at SXSW 2014! Currently, Geekscape is developing various feature film and TV projects including the fantasy pro wrestling comedy Paul London: Hero of the Prophecy!
About Dweeb Darlings Founded in 2013 by actresses Heidi Cox and Megan Green, Dweeb Darlings is a production company that seeks to find balance in the industry for female creators and female fronted content.  It is known for its original comedic series created by the two women, “Stalking LeVar.”  The critically acclaimed series, premiered it’s second season featuring the talents of over 30 guest & co-stars including Bonnie Gordon, Margot Rose, Cas Anvar, and David Blue. They also featured directors like America Young and Jenny Lorenzo. Heidi continues to head the company and is also moving forward with other upcoming projects like a sci-fi drama with Fonco Studios in addition to their Stalking LeVar Film with Geekscape.
Campaign Crowdfunding Film Geekscape Stalking LeVar