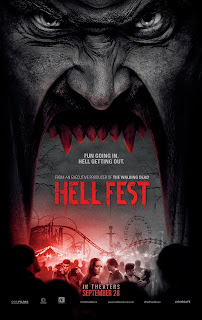 
GRAND PRAIRIE, Texas — August 21, 2018 — Six Flags Entertainment Corporation (NYSE: SIX), the world’s largest regional theme park company and CBS Films today announced an exclusive national partnership to provide Six Flags guests with a unique experience in support of CBS Films and Lionsgate’s latest horror movie release, Hell Fest, in theaters Friday, September 28, 2018.
In collaboration with Hell Fest creators, Six Flags and CBS Films are launching new haunted attractions based on the movie at three Six Flags theme parks this Fright Fest. The company’s industry leading entertainment teams at Six Flags Magic Mountain in Valencia, CA, Six Flags Great Adventure in Jackson, NJ and Six Flags Great America in Gurnee, IL will transform haunted mazes into real life replicas of the movie’s most unnerving, goriest and most epic scenes.
“Our guests visit Fright Fest to experience the scariest and most haunting attractions in North America. Partnering with CBS Films adds a new, completely immersive in-park experience to our existing lineup and will take this year’s event to a whole new level of fear,” said Vice President of North America Strategic Marketing & Partnerships Stephanie Borges.
Guests who are brave enough to enter will walk through the Devil’s Mouth into The Hell Fest Maze and venture through a number of rooms, each themed to depict scenes straight from the movie including:
·       The Mausoleum, an increasingly narrow corridor that forces guests to feel the touch of death;
·       The Mask Room a haunting room filled with floating white faces that could spring to life when visitors least expect it;
·       The Doll Room, filled with dolls straight out of the worst nightmares; and
·       The Torture Chamber, where the bodies of the disassembled, dissected and disemboweled wish to share their horrific ending.
Room by room, guests must find their way out, or risk being trapped by “The Other,” the movie’s deranged antagonist.
“Fall means Halloween and for millions of people, Halloween means Fright Fest at their favorite Six Flags theme park,” commented the film’s director Gregory Plotkin, who continued, “We are excited for Six Flags patrons to have the unique opportunity to step inside the terrifying world of ‘Hell Fest.’ I can’t wait to hear the screams and laughter!”
Six Flags will also promote the movie’s nationwide release through Six Flags Media Networks platforms; including Nielsen measured Six Flags TV.
Fright Fest runs Fridays, Saturdays and Sundays from September 15 through October 31. Operating schedules vary by park. For more information, visit www.sixflags.com.
About Six Flags Entertainment Corporation


Six Flags Entertainment Corporation is the world’s largest regional theme park company and the largest operator of waterparks in North America, with $1.4 billion in revenue and 25 parks across the United States, Mexico and Canada. For 57 years, Six Flags has entertained millions of families with world-class coasters, themed rides, thrilling water parks and unique attractions. For more information, visit www.sixflags.com.

About Hell Fest
A masked killer turns a horror themed amusement park into his own personal playground, terrorizing a group of friends while the rest of the patrons believe that it is all part of the show.  The film opens in theaters nationwide on September 28. For more information, visit https://www.hellfestmovie.com/.