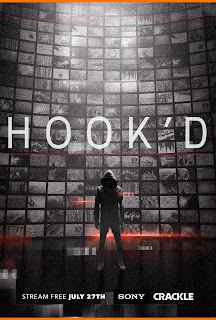 Filmed in the final month leading up to the largest and longest-running fighting game tournaments in the world – The Evolution Championship Series (Evo) in Las Vegas from August 3-5, “Hook’d” will immerse viewers in Hook’s professional world. Viewers will connect and hear Hook’s story of how he has overcome challenges as a young adult to contend for the Evo world title in Dragon Ball FighterZ and the influences that help guide him there including his New Jersey neighbor, mentor, and professional NRG ESports teammate Nairoby Quezada (aka Nairo), as well as New Jersey-born NBA Hall of Famer Shaquille O’Neal.

Hook was recently discovered by NRG, the ESports mega-team financially backed by the co-owners of the Sacramento Kings, as well as celebrities like Shaquille O’Neal, electronic music DJ Tiësto, and Alex Rodriguez. Hook rapidly ascended the North East local and conference fighting game competitions in just under four months to defeat some of the top ranked players in the world at the recent Summit of Power invitational. As the rookie, Evo is an opportunity for Hook to prove to everyone, including himself that he is a fighter – a fighter in a fighting game world, and a fighter to succeed out of the hard realities of his hometown of Paterson, New Jersey. Viewers will be given unprecedented access into Hook’s process and training, following him from his home to the international stage in Las Vegas as he prepares for the fight of his life.