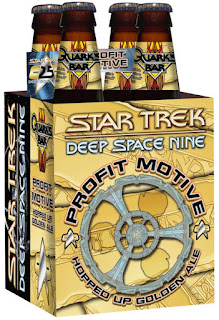 Shmaltz Brewing Company is hyper motivated to brew high quality award-winning beer, and the hopped up golden ale Star Trek Profit Motive is no exception. Feesha vou dole! (We hit the jackpot!) So whether you're a Trekkie or a craft beer enthusiast, get motivated to drink this latest extraterrestrial offering in the Star Trek beer series. Gar-day latinum sou-tah! (This is worth its weight in latinum.)

About Shmaltz Brewing Company
Founder and owner Jeremy Cowan established Shmaltz Brewing in San Francisco in 1996. The first 100 cases of He'brew Beer® were hand-bottled and delivered throughout the Bay Area from the back of his Grandmother's Volvo. Shmaltz Brewing now sells He'brew Beer across 30 states, through 40 wholesalers and in nearly 5,000 retailers.

After 17 years of being an outspoken cheerleader for contract brewing, Cowan and staff opened their own New York State production brewery in 2013 in Clifton Park, 10 minutes north of Albany. Shmaltz's home boasts a 50-barrel brewhouse with 30,000 barrels of annual capacity and packages a diverse and tasty variety of core and seasonal favorites in 12 and 22-ounce bottles and kegs. The Shmaltz Tasting Room is open six days a week (Tues-Sun) and offers tours, barrel-aged previews, beer to- go, and special releases.

RateBeer.com ranked Shmaltz as one of the "Top 100 Brewers in the World" in 2013, and the brewery recently brought home 1 platinum, 10 gold and 6 silver medals from the World Beer Championships.