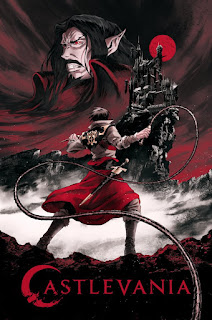 San Francisco, CA, July 23, 2018 – VIZ Media, LLC (VIZ Media), a premier company in the fields of publishing, animation distribution, and global entertainment licensing, expands its catalog with the acquisition of Season 1 of CASTLEVANIA.

VIZ Media announced the acquisition of CASTLEVANIA during its official panel held this past weekend at Comic-Con International, one of the nation’s biggest annual pop culture conventions. VIZ Media has acquired home media distribution rights to the American anime-influenced series, which is produced by Frederator Studios. CASTLEVANIA Season 1 has streamed to wide acclaim on Netflix.

Inspired by the classic video game series, CASTLEVANIA is a dark medieval fantasy following the last surviving member of the disgraced Belmont clan, trying to save Eastern Europe from extinction at the hand of Vlad Dracula Tepes himself. In Season 1, Trevor Belmont, embittered and excommunicated, finds himself drawn into a battle for the survival of Europe – a region that has brought doom upon itself by taking away the one thing its greatest monster loved.

“We are very excited to announce VIZ Media’s acquisition of the CASTLEVANIA animated series,” says Brian Ige, VIZ Media’s Vice President of Animation. “The series has drawn a wide following and we look forward to giving new and existing fans the opportunity to add this adventure to their personal collections.”

“CASTLEVANIA is one of those unique series that had instant global recognition and popularity. Frederator is proud to have VIZ as one of our special global partners, singularly equipped to reach our fans across the world,” says Fred Seibert, President & CEO of Frederator Networks.

For additional information on CASTLEVANIA and other anime and manga titles distributed and published by VIZ Media, please visit viz.com.

San Francisco, CA, July 23, 2018 – VIZ Media, LLC (VIZ Media), a premier company in the fields of publishing, animation distribution, and global entertainment licensing, expands its publishing catalog with a variety of new acquisitions announced during its official panel events held this past weekend at Comic-Con International 2018.

The new titles are scheduled for release beginning early next year and include MY HERO ACADEMIA: SCHOOL BRIEFS, the first of three prose short story collections based on the hit superhero action series created by Kohei Horikoshi. Rumiko Takahashi’s beloved manga series URUSEI YATSURA receives a new large trim edition, and Hiromu Arakawa brings us hilarious four-panel comics from the world of FULLMETAL ALCHEMIST. Two new NAUSICCAÄ books, THE ART OF NAUSICAÄ OF THE VALLEY OF THE WIND and NAUSICCAÄ OF THE VALLEY OF THE WIND PICTURE BOOK were also announced. Each book features vivid Studio Ghibli art from the legendary director Hayao Miyazaki.

Additional information on each of these titles will be announced in the near future.

MY HERO ACADEMIA: SCHOOL BRIEFS, By Kohei Horikoshi and Anri Yoshi
Debuts Spring 2019
The U.A. High School hero course teaches young hopefuls everything they need to become heroes. Between killer events like the sports festival and internships, there’s even a Parents’ Day! Life is never dull for the students of U.A. High!

URUSEI YATSURA, By Rumiko Takahashi
Rated ‘T+’ for Older Teens · Debuts Winter 2019
Revisit the acclaimed romantic comedy about an unlucky human boy who meets a beautiful space alien princess in this large trim size edition with all-new translations and new cover designs. In the series, Ataru Moroboshi’s supernatural encounters with the feminine kind all start when he’s chosen to play tag with an alien princess named Lum who invades the earth on her UFO. Ataru has ten days to touch Lum’s horns or aliens will take over the earth! As it turns out, the game of tag is only the beginning of Ataru's troubles, as he continues to attract strange encounters with otherworldly beings like beautiful snow spirit Oyuki and the sexy crow goblin Princess Kurama!

FULLMETAL ALCHEMIST: THE COMPLETE FOUR-PANEL COMICS, By Hiromu Arakawa · Rated ‘T’ for Teens · Debuts Spring 2019
Collects all of author Hiromu Arakawa’s beloved four-panel comic strips from the graphic novel series, her bonus strips from the anime DVDs of Fullmetal Alchemist and Fullmetal Alchemist: Brotherhood and rare strips from Japan! No joke is too cheesy and there are no sacred cows when Arakawa takes up her pen to spoof her own characters in this delightfully zany take on FULLMETAL ALCHEMIST!

THE ART OF NAUSICAÄ OF THE VALLEY OF THE WIND, By Hayao Miyazaki Debuts Spring 2019
Hayao Miyazaki’s Nausicaä of the Valley of the Wind, based on his own manga, was
released in 1984 and has been a cult classic ever since. In a long-ago war, humankind set off a devastating ecological disaster. The earth is slowly submerging beneath the expanding Sea of Corruption, an enormous toxic forest that creates mutant insects and poisonous spores. Beyond the sea lies the Valley of the Wind, a kingdom of barely 500 citizens and home to Nausicaä, who risks everything to save her people and bring peace and health to the valley. Includes sketches, developmental water colors, cel animation, and more.

NAUSICCAÄ OF THE VALLEY OF THE WIND PICTURE BOOK, By Hayao Miyazaki · Debuts Spring 2019
In a long-ago war, humankind set off a devastating ecological disaster. The earth is
slowly submerging beneath the expanding Sea of Corruption, an enormous toxic forest that creates mutant insects and releases a miasma of poisonous spores into the air. At the periphery of the sea, lies the Valley of the Wind, a kingdom of barely 500 citizens; a nation given fragile protection from the decaying sea's poisons by the ocean breezes; and home to Nausicaä, who risks everything to save her people and bring peace and health to the valley. Includes scene-by-scene illustrations and character dialogue from the film in a double-length picture book.