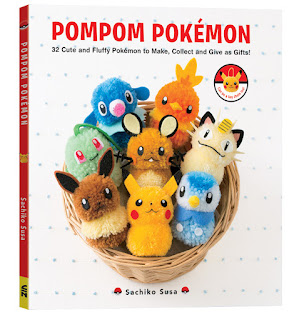 The new officially licensed craft book features dozens of patterns to create cute pompoms of popular POKÉMON characters and includes step-by-step instructions with full-color photographs. Instructions for a DIY pompom maker and a guide to different types of yarn are also included. POMPOM POKÉMON will be published exclusively in print with an MSRP of $17.99 U.S. / $24.99 CAN.

POMPOM POKÉMON was written by handicraft artist, Sachiko Susa, and contains 32 patterns with photographs and instructions for pompom versions of popular Pokémon like Pikachu, Charmander, Snorlax and Bulbasaur. Gotta make ’em all!

“POMPOM POKÉMON is sure to delight Pokémon fans and crafters alike,” says Nancy Thistlethwaite, Senior Editor. “Challenge yourself to make adorable yarn versions of your favorite Pokémon characters and have fun along the way!”