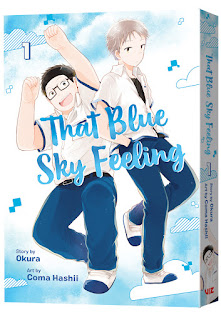 The new series, which is written by Okura and features artwork by Coma Hashii, is rated ‘T’ for Teens and will be published in-print with an MSRP of $10.99 U.S. / $12.99 CAN. THAT BLUE SKY FEELING also launches digitally on August 14th via viz.com and the VIZ Manga App, as well as from the Nook, Kobo, Kindle, iBooks, comiXology, and Google Play stores. Future volumes of the series will be published in 2019.

Outgoing high school student Noshiro finds himself drawn to Sanada, the school outcast, who is rumored to be gay. Rather than deter Noshiro, the rumor makes him even more determined to get close to Sanada, setting in motion a surprising tale of first love.

“THAT BLUE SKY FEELING is an honest teen drama that depicts that special kind of confusion that all kids, straight and LGBT alike, experience as they start to fall for friends and classmates in school,” says Joel Enos, Editor. “You can’t always foresee who you’re going to be attracted to. It should appeal to fans of YA and readers looking for a substantial story that addresses high school life and issues without embellishing or holding back.”

Tupac x Black Panther Avail Exclusively @ POP by Foot Locker
The Estate of Tupac Shakur and the Marvel Comics are collaborating to bring together one of the most legendary artists of all time and the most culturally-impactful comic book hero of our era, exclusively at POP by Foot Locker. Launching Friday, November 9, the exclusive 9- piece Tupac Shakur and Black Panther collection celebrates each's artistic far-reaching impact, while introducing new fans to their genius ($25-$50, www.footlocker.com)