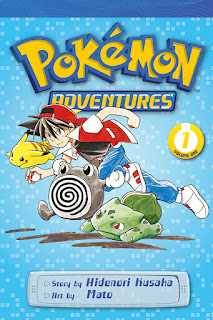 Beginning today and continuing each month through the start of 2019, POKÉMON ADVENTURES manga arcs will launch digitally on viz.com and the VIZ Manga App, as well as on VIZ Media digital partner platforms including the Nook, Kobo, Kindle, iBooks, comiXology, and Google Play stores.

A variety of popular POKÉMON ADVENTURES manga volumes as well as theatrical movie manga adaptations will be available.

The POKÉMON ADVENTURES manga series features story by Hidenori Kusaka and art by Satoshi Yamamoto. The POKÉMON movie-tie in manga volumes are by various authors and artists.