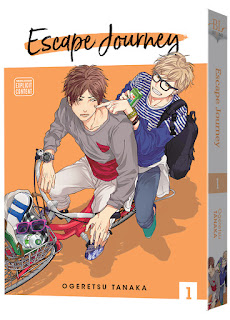 The new series about a love that is rekindled between a pair of former schoolmates is rated ‘M’ for Mature Readers. Print editions will carry an MSRP of $12.99 U.S. / $17.99 CAN each. Digital editions will carry an MSRP of $6.99 U.S. Readers have two methods of digital access to the series on SuBLimeManga.com – via a DRM-free downloadable PDF, viewable on any enabled eReader device and computer, as well as via the online manga viewer. Readers can also purchase a digital version through the NOOK, Kindle and Kobo eReaders as well as on Google Play and ComiXology. SuBLime will publish subsequent volumes of the series three times a year, ending with volume 3.

In ESCAPE JOURNEY, Naoto and Taichi’s first try at love during their high school days crashed and burned. Years later the two unexpectedly reunite on their first day of college. Tumultuous love often burns hot, and the glowing embers of their previous relationship reignite into a second try at love.

“Fans are going to enjoy this love story about high school ex’s rediscovering in adulthood their complicated feelings for each other,” says SuBLime Editor, Jennifer LeBlanc. “Like it or not, Taichi and Naoto still have an undeniable chemistry. Find out if these college students overcome their high school hang-ups or instead make the same mistakes that originally tore them apart.”

Visit SuBLimeManga.com for a complete array of additional yaoi manga titles that are available digitally in a download-to-own format for $6.99 (U.S. / CAN) each and are viewable as a PDF on any enabled eReader device or computer or accessed via the online manga viewer found on the web site. 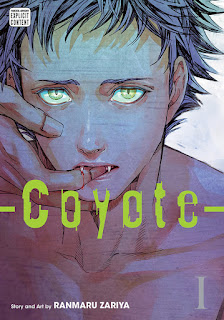 A Werewolf And A Human Fall In Lust (Love?)
In The New Series From VOID Creator

San Francisco, CA, August 28, 2018 – SuBLime, the leading global English-language yaoi manga publisher, launches on October 9th a new manga series about a forbidden romance between a werewolf and a human with the print and digital debut of COYOTE.

The series, by creator Ranmaru Zariya, is rated ‘M’ for Mature. Print editions carry an MSRP of $12.99 U.S. / $17.99 CAN and the digital versions will have an MSRP of $6.99 U.S. per volume. Readers have two methods of digital access to the series on SuBLimeManga.com – a DRM-free downloadable PDF, viewable on any enabled eReader device and computer, as well as via the online manga viewer. Fans can also purchase a digital version through NOOK, Kindle, Kobo, Google Play, and ComiXology.

Coyote, a werewolf living among humans, goes through life hiding his true identity. But when the handsome pianist he’s had his eye on catches Coyote off guard during his first heat, forbidden passion explodes.

“COYOTE is Ranmaru Zariya’s second English-language release, following VOID, her first work with us,” says SuBLime Editor, Jennifer LeBlanc. “When the supernatural and human worlds collide, primal urges cause tensions to mount and sparks to fly. There’s more than one kind of heat emanating from this title!”