Posted by Collecting Pop Culture on September 16, 2018
DENVER - September 13, 2018 - GKIDS, the acclaimed producer and distributor of multiple Academy Award®-nominated animated features, and Fathom Events are proud to announce the U.S. debut of “MIRAI.” The Japanese animated film from Mamoru Hosoda, the celebrated director behind The Boy and the Beast, Wolf Children, Summer Wars, and The Girl Who Leapt Through Time, and Japan’s Studio Chizu, premiered at Cannes in the “Directors’ Fortnight” section. “MIRAI” will be released in both its original Japanese language and a new English dubbed version. In addition to enjoying the full animated feature, attendees will view an exclusive interview with director Mamoru Hosoda.
Tickets for “MIRAI” can be purchased at www.FathomEvents.com and participating theater box offices. 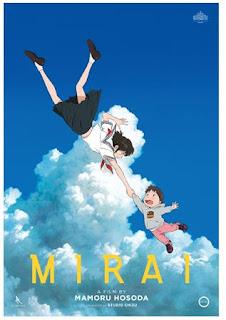 “MIRAI” comes to more than 700 U.S. cinemas Thursday November 29 at 7 p.m. (dubbed) and at 8 p.m. (subtitled), Wednesday, December 5 at 7 p.m. (subtitled), and Saturday, December 8 at 12:55 p.m. (dubbed) all at local times. The film will also receive a limited theatrical release by GKIDS starting Friday, November 30. Tickets for “MIRAI” are available now at www.FathomEvents.com, www.MiraiMovie.com or at participating box offices. For a complete list of theater locations, visit the Fathom Events website (theaters and participants are subject to change).
From acclaimed director Mamoru Hosoda (Summer Wars, Wolf Children) and Japan’s Studio Chizu comes “MIRAI,” a daringly original story of love passed down through generations. When four-year-old Kun meets his new baby sister, his world is turned upside down. Named Mirai (meaning “future”), the baby quickly wins the hearts of Kun’s entire family. As his mother returns to work, and his father struggles to run the household, Kun becomes increasingly jealous of baby Mirai... until one day he storms off into the garden, where he encounters strange guests from the past and future – including his sister Mirai, as a teenager. Together, Kun and teenage Mirai go on a journey through time and space, uncovering their family’s incredible story. But why did Mirai come from the future?
An official selection at Cannes Directors’ Fortnight, and the epic capstone of director Mamoru Hosoda’s career, “MIRAI” is a sumptuous, magical, and emotionally soaring adventure about the ties that bring families together and make us who we are.
Earlier this year, GKIDS and Fathom Events presented the US premieres of Mary And The Witch’s Flower, Fireworks, The Night Is Short, Walk On Girl, and acclaimed director Satoshi Kon’s cult classic Perfect Blue to big screens nationwide.
“Our ongoing partnership with GKIDS continues to bring the very best of Japanese animated features to the U.S.,” Fathom Events CEO Ray Nutt said. “This Premiere is an exciting opportunity for anime fans to see this lauded feature.”


“Mamoru Hosoda is one of the most visionary and exciting animation filmmakers working today,” GKIDS President Dave Jesteadt said. “As soon as we saw “MIRAI,” we knew we had to share this beautiful film with as many audiences as possible, and we are pleased that our partnership with Fathom Events makes that possible.”

About Fathom Events
Fathom Events is the leading event cinema distributor with theater locations in all top 100 DMAs® (Designated Market Areas) and ranks as one of the largest overall theater content distributors. Owned by AMC Entertainment Inc. (NYSE: AMC), Cinemark Holdings, Inc. (NYSE: CNK) and Regal Entertainment Group (NYSE: RGC), Fathom Events offers a variety of unique entertainment events in movie theaters such as live performances of the Metropolitan Opera, top Broadway stage productions, major sporting events, epic concerts, the yearlong TCM Big Screen Classics series, inspirational events and popular anime franchises. Fathom Events takes audiences behind the scenes for unique extras including audience Q&As, backstage footage and interviews with cast and crew, creating the ultimate VIP experience. Fathom Events’ live Digital Broadcast Network (“DBN”) is the largest cinema broadcast network in North America, bringing live and pre-recorded events to 941 locations and 1,496 screens in 181 DMAs. The company also provides corporations a compelling national footprint for hosting employee meetings, customer rewards events and new product launches. For more information, visit www.FathomEvents.com.
ABOUT GKIDS
GKIDS is the producer and distributor of award-winning feature animation for both adult and family audiences. Since 2010, GKIDS has scored an astounding 10 Best Animated Feature Oscar® nominations with The Secret of Kells in 2010, A Cat in Paris and Chico & Rita in 2012, Ernest & Celestine in 2014, The Tale of The Princess Kaguya and Song of the Sea in 2015, Boy and the World and When Marnie Was There in 2016, My Life as a Zucchini in 2017, and The Breadwinner in 2018.  GKIDS also handles North American distribution for the famed Studio Ghibli library of films, one of the world’s most coveted animation collections with titles Spirited Away, My Neighbor Totoro, Princess Mononoke and others. GKIDS recently launched ANIMATION IS FILM, an annual LA-based film festival. The first edition took place last October at the TCL Chinese Theater in Hollywood for a sold-out audience of 5,000 and generated over 750 million media impressions.  ANIMATION IS FILM embraces the highest aspirations of animation as a cinematic art form and is a vocal advocate for filmmakers who push the boundaries of their work to the fullest range of expression of which the medium is capable.
www.gkids.com
www.animationisfilm.com
Anime Fathom Events GKIDS Mamora Hosoda MIRAI