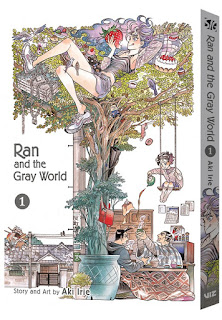 
RAN AND THE GRAY WORLD is written and illustrated by Aki Irie and will be published under the VIZ Signature imprint. The series will carry a print MSRP of $14.99 U.S. / $19.99 CAN. RAN AND THE GRAY WORLD also launches digitally on November 20th for $10.99 via viz.com and the VIZ Manga App, as well as from the Nook, Kobo, Kindle, iBooks, comiXology, and Google Play stores. Future volumes of the series will be published on a quarterly basis.

Ran Uruma can’t wait to grow up and become a sorceress like her mother, so with the help of a magical pair of sneakers, she transforms into an adult and sets off! Her father and older brother Jin try to keep her home safe, but Ran is determined to advance her powers and have adventures of her own!

“RAN AND THE GRAY WORLD will make a lasting impression on readers with its lush artwork and intriguing story,” says Amy Yu, Editor. “I love the gorgeous details and all the fun characters—it’s actually my new favorite series right now, and it has many fans at VIZ as well! We hope manga and graphic novel fans will find this series as charming as we do.”

Manga creator Aki Irie began her professional career as a manga artist in 2002 with the short story “Fuku-chan Tabi Mata Tabi” (Fuku-chan on the Road Again), which was published in the monthly manga magazine, Papu. RAN AND THE GRAY WORLD, her first full-length series, is also the first of her works to be released in English.

About VIZ Media, LLC
Established in 1986, VIZ Media is the premier company in the fields of publishing, animation distribution, and global entertainment licensing. Along with its popular digital magazine WEEKLY SHONEN JUMP and blockbuster properties like NARUTO, DRAGON BALL, SAILOR MOON, and POKÉMON, VIZ Media offers an extensive library of titles and original content in a wide variety of book and video formats, as well as through official licensed merchandise. Owned by three of Japan's largest publishing and entertainment companies, Shueisha Inc., Shogakukan Inc., and Shogakukan-Shueisha Productions, Co., Ltd., VIZ Media is dedicated to bringing the best titles for English-speaking audiences worldwide.
Learn more about VIZ Media and its properties at viz.com.
Manga Manga Series Ran and The Gray World Viz Media