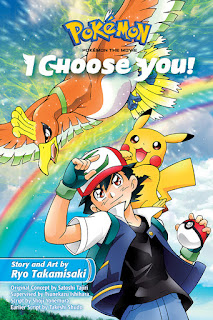 New POKÉMON THE MOVIE: I CHOOSE YOU! Manga Depicts Ash And Pikachu’s First Adventure Together

San Francisco, CA, November 7, 2018 – VIZ Media, LLC (VIZ Media), a premier company in the fields of publishing, animation distribution, and global entertainment licensing, delivers adventure and fun with the release of the POKÉMON THE MOVIE: I CHOOSE YOU! manga on December 11th.

When Ash Ketchum oversleeps on his 10th birthday, he ends up with a stubborn Pikachu instead of the first partner Pokeěmon he wanted! But after a rocky start, Ash and Pikachu become close friends and true partners—and when they catch a rare glimpse of the Legendary Pokeěmon Ho-Oh in flight, they make plans to seek it out together. Trainers Verity and Sorrel join Ash on his journey, and along the way, they meet the mysterious Mythical Pokeěmon Marshadow. When they near their goal, an arrogant Trainer named Cross stands in their way. Can Ash and Pikachu defeat him and reach Ho-Oh as they promised, or will their journey end here?

“The POKÉMON THE MOVIE: I CHOOSE YOU! manga gives fans a whole new way to enjoy the unforgettable story of Ash and Pikachu and how they met,” says Annette Roman, Editor. “We invite Pokémon fans to add this newest release to their personal collections.”

VIZ Media distributes the home media versions of POKÉMON THE MOVIE: I CHOOSE YOU! on Blu-ray and DVD. For additional information anime and manga titles distributed and published by VIZ Media, please visit viz.com.

About VIZ Media, LLC
Established in 1986, VIZ Media is the premier company in the fields of publishing, animation distribution, and global entertainment licensing. Along with its popular digital magazine WEEKLY SHONEN JUMP and blockbuster properties like NARUTO, DRAGON BALL, SAILOR MOON, and POKÉMON, VIZ Media offers an extensive library of titles and original content in a wide variety of book and video formats, as well as through official licensed merchandise. Owned by three of Japan's largest publishing and entertainment companies, Shueisha Inc., Shogakukan Inc., and Shogakukan-Shueisha Productions, Co., Ltd., VIZ Media is dedicated to bringing the best titles for English-speaking audiences worldwide.
Learn more about VIZ Media and its properties at viz.com.

About Pokémon
The Pokémon Company International, a subsidiary of The Pokémon Company in Japan, manages the property outside of Asia and is responsible for brand management, licensing and marketing, the Pokémon Trading Card Game, the animated TV series, home entertainment, and the official Pokémon website. Pokémon was launched in Japan in 1996 and today is one of the most popular children’s entertainment properties in the world. For more information, visit www.pokemon.com.
Manga Manga Adaption Pokemon Pokemon The Movie: I Choose You! Viz Media