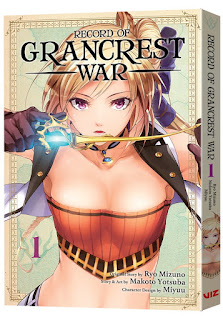 The riveting fantasy adventure was created by Ryo Mizuno, who also authored the iconic series Record of Lodoss War and features story and artwork by Makoto Yotsuba with designs by Miyuu. RECORD OF GRANCREST WAR is rated ‘M’ for Mature Readers, and carries a print MSRP of $9.99 U.S. / $12.99 CAN. This series will also be available digitally via viz.com and the VIZ Manga App for $6.99, as well as from the Nook, Kobo, Kindle, iBooks, comiXology, and Google Play stores. Future editions of this ongoing series will be published by VIZ Media on quarterly basis.

In a world where the noble elite are supposed to fend off the threat of terrifying Chaos but instead engage in pointless, petty squabbles, young mage Siluca Meletes dreams of bringing justice to the land. In the series’ opening volume, when tragedy strikes during a wedding that would bring together the Fantasia Union and the Factory Alliance, Siluca finds herself with no choice but to forge a new future for the world. With the aid of Theo, a knight errant with great potential, she will go against the world's order to achieve peace through the magical power of crests. And as Theo soon finds out, her methods are more than a little unorthodox!

“RECORD OF GRANCREST WAR is conceived by the visionary creator Ryo Mizuno, who drew wide acclaim for his earlier work of fantasy adventure Record of Lodoss War, which was a gateway title for scores of anime fans around the world, including myself,” says David Brothers, Editor. “Siluca and Theo have a really fascinating dynamic together, and a reckless but efficient approach to reforming a land ruled by war and burdened by Chaos.”

About VIZ Media, LLC
Established in 1986, VIZ Media is the premier company in the fields of publishing, animation distribution, and global entertainment licensing. Along with its popular digital magazine WEEKLY SHONEN JUMP and blockbuster properties like NARUTO, DRAGON BALL, SAILOR MOON, and POKÉMON, VIZ Media offers an extensive library of titles and original content in a wide variety of book and video formats, as well as through official licensed merchandise. Owned by three of Japan's largest publishing and entertainment companies, Shueisha Inc., Shogakukan Inc., and Shogakukan-Shueisha Productions, Co., Ltd., VIZ Media is dedicated to bringing the best titles for English-speaking audiences worldwide.
Learn more about VIZ Media and its properties at viz.com.
Manga Manga Series Record of Grancrest War Viz Media